Switzerland, Part 3: In the Magic Kingdom (Or, did my heart just stop beating, can someone please pinch me?) 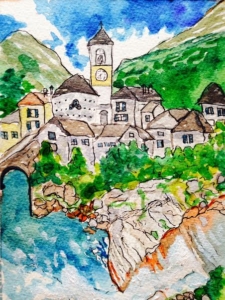 Today was about Jack Johnson and the Valle Verzasca. I’m not sure which enchanted me more, but to my husband, who is reading this, the answer is you, for planning such a stellar trip: Hats off and a big heaping of gratitude! It’s true; this one was planned entirely by my beloved, and I was so impressed.

Somehow, with all the adventure around us, we still managed to relax, take leisurely breakfasts while sipping fantastic coffee, and breathing in the moment. We did many laps in the pool and even fit in some reading … but, um, there is that valley I read about and that adorable looking town, so, yeah, let’s go!

The Valle Verzasca (which I still can’t pronounce properly) is, simply put, a slice of heaven. The road twists and turns, following the river, which pulses with water that’s brilliant turquoise and so clean that it makes you wonder if maybe the Evian folks sneak in and steal it. It spills over boulders the size of small houses, creating swimming holes and waterfalls. 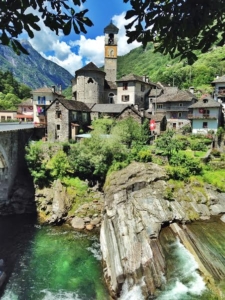 Almost too cute for words, the village was layered atop a hill, giving the impression that there’s no separation between the town and the river, with copious boulders and waterfalls. Some of these boulders were giant, literally the size of a house, and made for the most beautiful little beach areas right in the river and lovely (albeit cold) swimming holes. But the air was hot, and the place too other worldly not to jump into that water — so I did, again and again. Jumping in, swimming to another rock, walking upstream on said rock, jumping back in and letting the current carry me, then doing it again. What folly! 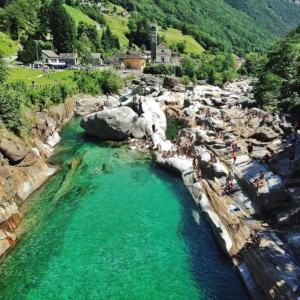 Looking at the time, we realized we didn’t want to be late for Jack Johnson, and so this little party needed to wrap up so we could go to the next festivity. 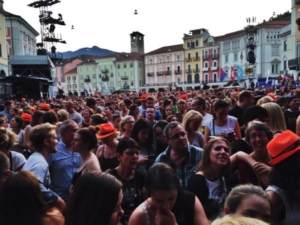 During July in Locarno, they turn the the Piazza Grande, or town square, into a concert venue, and what a lovely venue it makes. We decided to grab dinner right on the piazza and keep it simple: pizza and the local white merlot. I would normally go red with the pizza, but at 86 degrees, white won out.

The Swiss in this region definitely got their food influence from the Italians, and the pizza was fantastic. I recall capers and mushrooms and other yummy things, with a crust light and perfect, 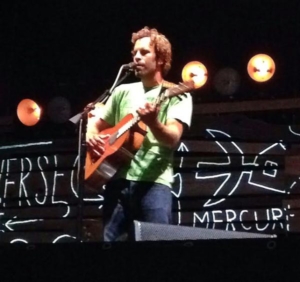 Now it was time for the concert, and since we were already there and happened to get in line early, we were front row. Literally. I have long appreciated Jack’s happy-go-lucky, sweet, soulful tunes, and seeing him live was a treat. Zack Gill — Jack’s piano, accordion and other instrument player — almost stole the show, playing with the audience and rockin’ out some sweet tunes. I kept turning around to be sure to take in my surroundings and just soak it all in as the music washed over us.

The show is over and it’s late: Time for these two jet-lagged travelers to get to sleep, floating on a cloud of music, sweet music!